Carter has a new board of military equipment to Toulon 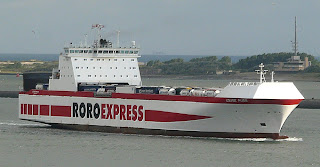 A large roll-on/roll-off white and red appeared yesterday in the harbor of Toulon. A boat to look as much like the familiar vessels operated by the Turkish company UN Ro-Ro to transport truck trailers between the port and Var Tekirdag, to the west of Istanbul. The ship also, like them, reached the port of civil Brégaillon. But in fact, it has nothing to do with the Franco-Turkish maritime highway and, after refueling, he must now join arsenal. Belonging to the Dutch company Ernst Russ, Louise Russ is actually chartered by the French Ministry of Defence to carry a load of new military equipment. Cargo probably intended for operation Serval, Mali. Asked about the nature of the cargo and its destination, the General Staff of the Armed Forces did not, however, wish to comment on the subject.


Built in 2008, Louise Russ is, in any case, capable of carrying a load very important. 174 meters long with a width of 25.5 meters, the ship is registered in Gibraltar, has two bridges representing 2,500 meters of garages, a maximum capacity of about 350 vehicles, enplaned and deplaned via a large ramp located aft. The ship is also designed to carry up to 426 TEUs (Twenty Feet Equivalent, standard size of the container), 80 reefer (refrigerated containers for fresh produce).

For the record, two large shipments of military equipment have already left for Mali under the strategic projection by sea. While building projection and command Dixmude landed in Dakar, on January 28, 500 men and 140 vehicles of a Joint Battle Group (IAWG), the ferry MN Eider happened in the Senegalese port with about 250 vehicles and a hundred containers belonging to the 1st Brigade, including logistics